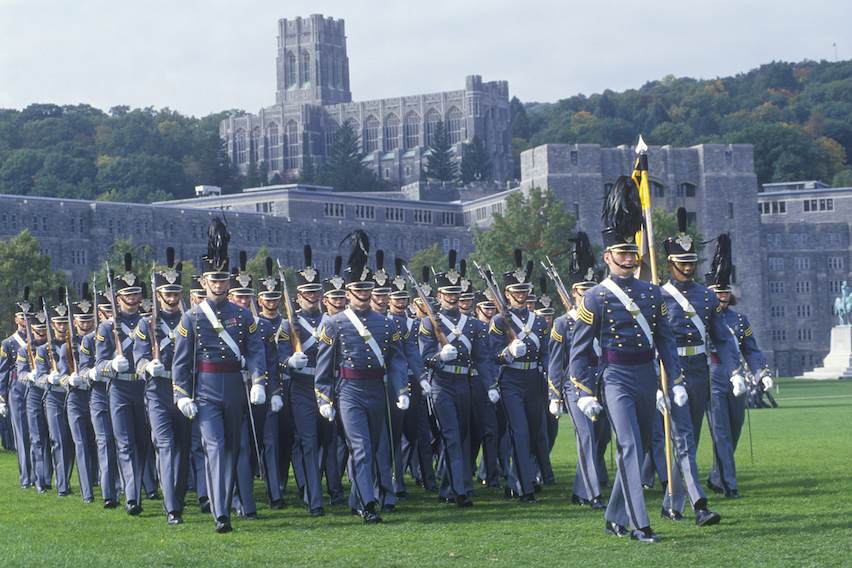 How to Get Into West Point: Admissions Data & Strategies

During the Revolutionary War, George Washington identified a plateau on the west bank of the Hudson River, about 50 miles north of New York City, as the single most important strategic position in all of nascent America. Despite the best treasonous efforts of Benedict Arnold to hand over the newly-fortified lands to the British, the Continental Army never lost control of West Point and it has remained the longest continuously occupied military post in the United States. In 1802, President Jefferson turned West Point into the United States Military Academy (USMA) where, for hundreds of subsequent years, it has churned out a steady flow of American military leaders.

The United States Military Academy continues to successfully complete its mission “to educate, train, and inspire the Corps of Cadets so that each graduate is a commissioned leader of character committed to the values of Duty, Honor, Country and prepared for a career of professional excellence and service to the Nation as an officer in the United States Army.”

High school students seeking admittance into the USMA will face a different type of admissions maze than encountered by applicants to other uber-selective universities. To help guide you through the labyrinth, we will cover:

Going from “Nominated” to “Qualified” to “Admitted”

Out of the 12,294 applicants seeking a spot in the West Point Class of 2022, only 4,005 ended up receiving nominations. However, the pool was then sliced in half again as the admissions committee found 2,228 of that group to be “qualified” physically and academically. Another round of scrutiny cleaved down the number of men and women left standing to a mere 1,210, which equates to a 9.8% acceptance rate.

There is an image of perfection projected by the USMA that might scare non-1600 SAT scorers into not even bothering to apply. Yet, an examination of the 2020-21 freshman class reveals a far less intimidating picture. The average SAT score for this cohort was 1322 and the average ACT composite was 31.

Those seeking admission to Stanford’s Computer Science program do not need to seek the formal endorsement of Bill Gates, Mark Zuckerberg, or Google-founders Larry Page and Sergey Brin. That would just be strange, right? Well, when applying to West Point you actually are required to obtain a Congressional nomination from one of the following sources:

While getting more than one Congressional nomination will not benefit you, it behooves applicants to apply to both of their Senators as well as their local House of Representatives member as doing so will increase the overall odds of obtaining a singular nomination. Each MOC possesses five nomination slots per year across all five service academies. Each senator has the same.

If your mother or father has been an active duty member of the Army, Navy, Air Force, Marines, or the Coast Guard for eight or more years, you are eligible for a Presidential nomination. Sons and daughters of a retired/disabled/deceased armed forces veteran are afforded the same opportunity, however, Presidential nominations are capped at 100 per year so it recommended that these applications also submit requests to their MOCs.

Children of Medal of Honor winners are granted the same courtesy but there is no annual cap placed on them. However, individuals enrolled in ROTC can have their Senior Instructor nominate them instead of a MOC.

How many West Point students receive Congressional vs. Service-Connected nominations?

Of West Point’s roughly 4,400 undergraduate students, the greatest percentage were nominated by the 435 members of the House of Representatives (who each typically nominate one candidate to each academy annually), Senate-nominated applicants represent the second largest contingent, followed by Service-Connected nominations.

When to apply for a West Point nomination

While West Point doesn’t need your nomination paperwork until the 31st of January during your senior year, it is advisable to start the process of reaching out to your MOCs during 11th grade. The online Vice Presidential nomination application opens on March 1st and closes the following January 31st. All MOC nominating offices have their own deadlines. Some members of the HOR and the Senate have application deadlines in September of senior year. Alternatively, others have a later November deadline; most will allow you to submit your applications as early as the second-semester of your junior year.

Who actually gets into West Point?

Firstly, let’s look at the demographics of one recent USMA freshman class, beginning with ethnicity:

A look at the gender split reveals that university enrolls far more men than women:

One recent West Point freshman class participated in the following extracurricular activities (out of 1,210 total members):

West Point’s yield rate is 98%. This figure blows away other high yield institutions such as Harvard (82%) or MIT (77%). In short, very few people go through West Point’s harrowing and lengthy admissions process and ultimately enroll somewhere else.

Tips for Applying to West Point

If you plan on joining the nearly 16,000 USMA hopefuls for the next admissions cycle, you should know the following:

Make sure to dedicate sufficient time and effort to the three essays required by United States Military Academy. In the 2021-22 cycle, they were as follows:

1) In the space below, explain why you want to attend the United States Military Academy and serve on active duty as an Army officer.

3) West Point and the Army are committed to the idea that respect for others and an understanding of diversity are important leadership traits. Why will you be successful in working with leaders, peers, and subordinates of a gender, color, ethnicity, and/or religion different from your own?

All three questions are extremely straightforward and not anything that a West Point candidate should have trouble answering. One of the best ways to prepare is to self-reflect on why you are making this career/life choice and what being a military officer means to you. It is best to speak with current and past military members, mentors, teachers, and your family as you develop these answers. The goal is not to be highly-creative with your responses, but rather to leave an unmistakable impression that you are a mature and committed young man or woman, who understands the responsibility and sacrifice that lie ahead.

Should I Apply to West Point?

In conclusion, there are good reasons for the long line jockeying for a position inside of West Point. The USMA boasts an outstanding 7:1 student-to-faculty ratio. There are 36 majors to choose from including nine with the word “engineering” in the title. This works out well as West Point runs one of the premier undergraduate engineering programs in the country. The most popular majors include business, mechanical engineering, systems engineering, engineering (general), economics, history, and military science.

Fitting for a college full of disciplined cadets, you won’t find a school with a more uniform outcome for graduates—fortunately, the results for degree-earners are all equally positive. West Point grads assume the title of Second Lieutenant upon exiting West Point and earn an average starting salary of $74,000; the job placement rate is an unmatched 100%. Not bad for a school that doesn’t charge a dime for tuition or room and board.

Of course, it goes without saying that all teens applying to a school of the USMA’s caliber also need to also have a proper mix or “target” and “safety” schools on their college list. More on creating a balanced college list can be found here.